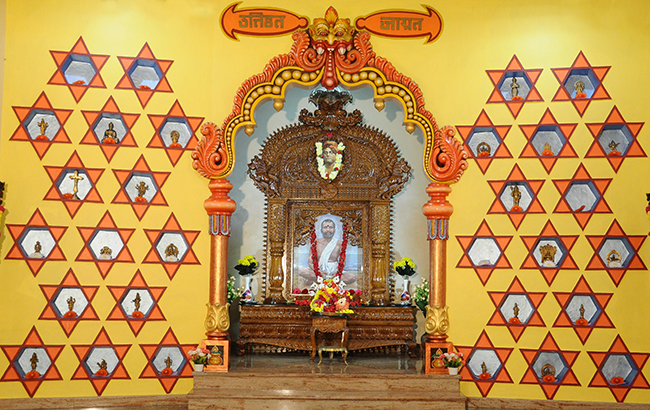 DIVINE PARK is a unique universal platform of Gods and Goddesses of all religions. It is verily a spiritual laboratory of Sri Guruji – Swami Vivekananda. Divine Park mainly focuses on Atmashakti Jagriti for immersion into spiritual quest with devotion and direction. It inspires the aspirants to walk on the path of Practical Vedanta and Dynamic Spirituality.

Divine Park is located at a village called Saligrama – 20 kilometer north of Udupi on the National Highway NH66. The temple was inaugurated on Jan 14th, 1986 by Pujya Swami Jagadatmanandaji, a senior monk of Sri Ramakrishna Mutt. Since then Sri Guruji has been constantly guiding all the spiritual aspirants towards the goal of self-realization.

A host of activities are being conducted regularly at Divine Park with the motto of ‘Man-Making and Nation-Building’.

At the Divine Park temple, Sri Ramakrishna Paramahamsa is the main Deity. Idols of thirty Gods & Goddesses have been installed, which uphold the universal principle of ‘God is ONE, names and forms are many’. Regular pooja is performed to all these Gods and Goddesses.The speciality lies in the spiritual atmosphere where absolute silence is maintained.

It is the sacred place where sage Budha Kaushika lived 1500 years ago. Spiritual seekers around the world, have explored and found that the greatest truth is within ourselves. This physical world is a play ground for the evolution of the innate divinity. Hence, all activities at Divine Park primarily aim at providing spiritual orientation. While we remain engaged in our day-to-day worldly activities, we can simultaneously progress towards self-refinement and reach higher level of evolution. The attainment of ultimate destiny through self-realization and self-identification with God Himself is being realized by following various methods of Sadhana.

With this noble goal, Divine Park Movement has been launched by Pujya Doctorji, Dr. A. Chandrashekhara Udupa, under the direct guidance of his spiritual master, Sri Guruji – Swami Vivekananda.