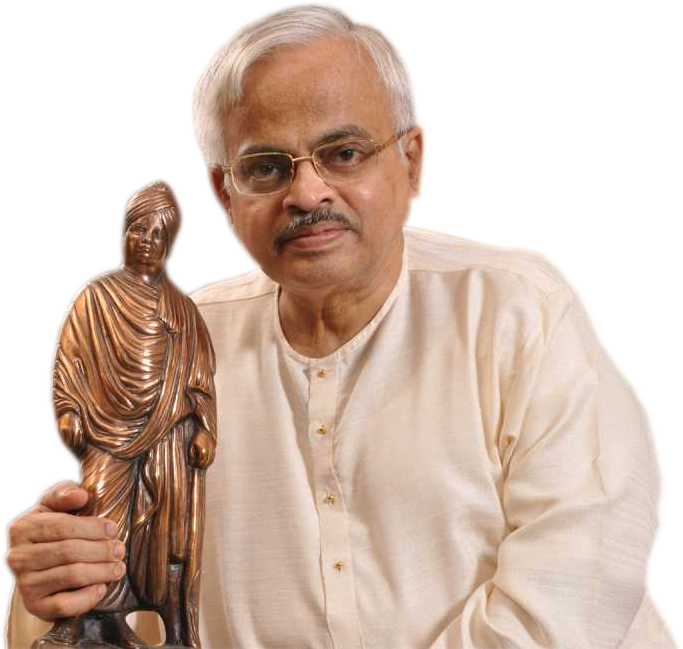 Sri Guruji – Swami Vivekananda has been guiding spiritual seekers on the path of fruitful sadhana by relaying divine messages through his spiritual medium, Dr. A Chandrashekhara Udupa B. Sc, M.B.B.S, F.A.G.E, a doctor by profession and Self-Realized saint, Rishi of our times.

Rev. Swami Jagadatmanandaji a senior monk of Ramakrishna Math, sowed the seeds of spiritual adventure in the young Sri Chandrasekhar Udupa, by way of his thought provoking speech.

It was during the beginning of his medical course when he has just entered Mysore Medical College after completing his B. Sc. in distinction that he got a chance of hearing the inspiring words of Swami Jagadatmanandaji who delineated to the greatness of Swami Vivekananda’s personality in unequivocal terms and proclaimed:“So limitless is Swami Vivekananda’s love for mankind that though deceased His spirit lingers in the air that we breathe and toils day and night for the weal and welfare of entire humanity and He does respond to the earnest call of Sadhana to guide and lead to the goal sublime”. These words reverberated in Dr. Udupa’s heart and the sense of spiritual adventure rose in his mind. And with the scientific spirit to test those words, he took up intense spiritual Sadhana. Dr. Udupa had in his room a picture of Swami Vivekananda in Chicago pose. When Dr. Udupa entered his room that day being charged with Swami Jagadatmananda’s words, He seemed to be throbbing with life.

Like Ekalavya who learnt archery before the image of Dronacharya, Dr. Udupa delved deep into spiritual Sadhana of japa tapa (meditation), sashtanga namana (prostration) and sincere prayers before the photo of his Guruji, nay before Swami Vivekananda whom he thought to be alive.As days went by, he yearned for his Guruji with the sum total of love as Sri Ramkrishna said, of the mother towards the child, of the wife towards her husband and of the miser towards the money. He practised his sadhana with utmost devotion and dedication, never swerving from his path.

After years of such single minded sadhana there dawned in the life of Dr. Udupa spiritual enlightenment! Swami Vivekananda granted him His darshana or vision for a while with these assuring words,

This was Doctorji’s first spiritual triumph. It confirmed the very existence of Swami Vivekananda in the subtle form, and proved beyond doubt that He responds to the earnest call of devotion.With this fortified conviction he became all the more fervent in his sadhana. Swami Vivekananda, Sri Guruji became the whole and sole of his life. He yearned for more and more visions and words of Guruji, there too he succeeded. His intense yearning bore fruits of frequent visions and consoling words of his invisible master. He surrendered himself to Guruji and his heart and soul aspired for his service all the more. We know that the Vedas, the Upanishads, the Bible, the Quran are all divine messages granted to seers, sages, saints and fakhirs while they were in meditation and hence they are called shrutis. The divine messages of Sri Guruji to Doctorji are nothing but modern shrutis!Since the last 30 years, Doctorji has been guiding lakhs of devotees and inspiring them to tread the path of Sadhana to become ideal householders and realize God.